In just under two hours I removed, modified and returned seven contact tracks to the layout and they all worked, first time!

At the outset I wholeheartedly acknowledge the fine work done already on this subject:

without which I would be still trying to use a variety of reed switches, infra red emitters and detectors, and then disguising them around my layout. I also acknowledge, from the Netherlands: Rudysmodelrailway – Arduino used as an S88 occupancy detector board .

The beauty of the ‘Cook’ detection track is that nothing is visible as no outer rails are needed to be cut, and (unlike the infra-red detectors I’ve played with) only one wire (not three), needs to be routed back to the Arduino Mega acting as an S88 occupancy detector. As Rudy Boer states the Arduino clones cost only a few Euros.

Where I deviate slightly from Stephen Cook is the process rather than the outcome.

Initially I noticed a slight stutter of the locomotives running over the contacts, at low speeds however in normal running speeds there were no problems, even when the contact wire is unconnected to the Arduino. By readjusting the height of the studs, I’ve since overcome the stutter issue.

Tools used Dremel 3000, multimeter, fine nose pliers cutter/stripper, soldering iron. On the floor my trusty Makita with my longest masonry drill bit for making wiring ‘tunnels’ in the foam base board.

The track with the three stud strip removed, ready for tinning and adding the wire 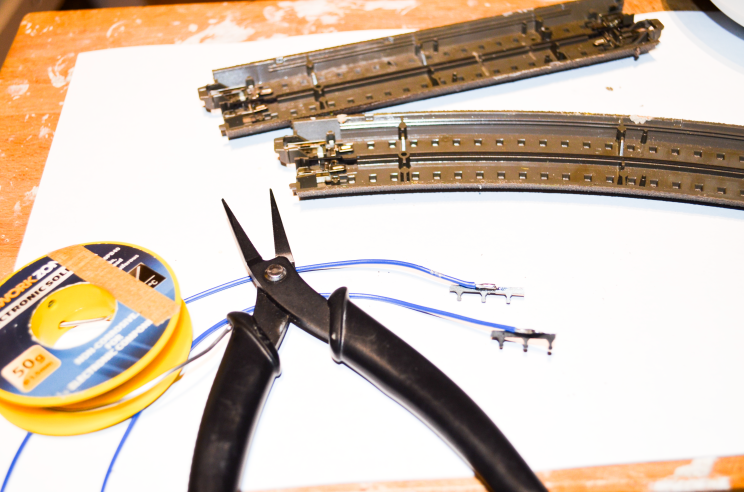 The wires now firmly soldered across the top of the 3 stud middle rail, ready for reintroducing back into the track bed. 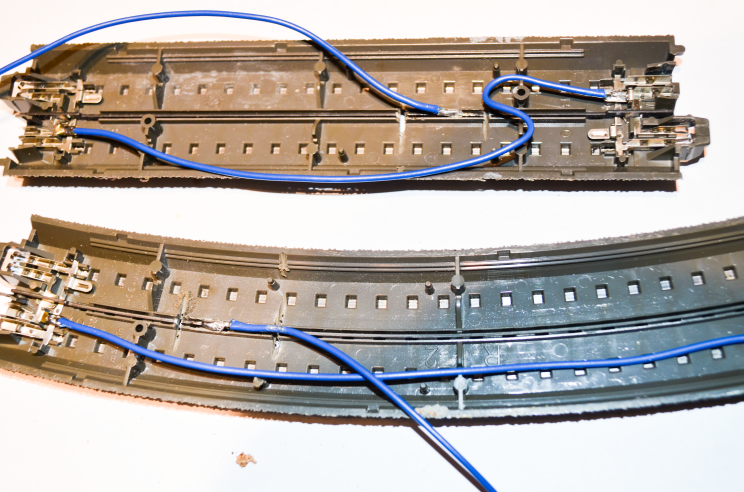 My first batch of making the occupancy detector tracks was hampered by the erratic behaviour of my soldering iron which had a dodgy connection, leading to some messy joints. Thanks to my local Maplins store I was able to exchange it for a fully function iron which made my second batch of tracks a doddle to complete.