Märklin in Germany is a long established company which excels in the manufacture of model rail locomotives, coaches etc.

In 2013 whilst holidaying in Germany, I purchased this digital starter set. It came with two digitally operated points/switches. Points=UK, Switches=US, Weiche=DE

Shortly after I returned from Germany, I purchased from Amazon.uk:

These two sets with some additional track and other bits and pieces made up my first attempt at a HO scaled 1:87 layout. It comprised of a single track with crossover loop and a passing loop for a station and a small siding . The orange section was a raised incline that looped back on itself. In retrospect the incline was greater than the recommended 4% and caused occasional slippage of the locomotives. The crossover loops allowed a locomotive to reverse its passage around the main route..

I kept the layout until September 2015 when I created the layout below. It is designed as a double tracked oval with crossover loops and sidings providing chances for a back to back operation as well as the two other locos passing.

I now operate three digital locomotives two steam locomotives and a diesel given as a 2015 Christmas present.

In this revision of my layout I’ve added a high level reversing loop which should provide a continual looping of locomotives plus the possibility of two other locomotives working on other routes, that is if ever I get a CS3 and S88’s working in concert. I’m also hoping to operate a shuttle service between the station and the goods yard. 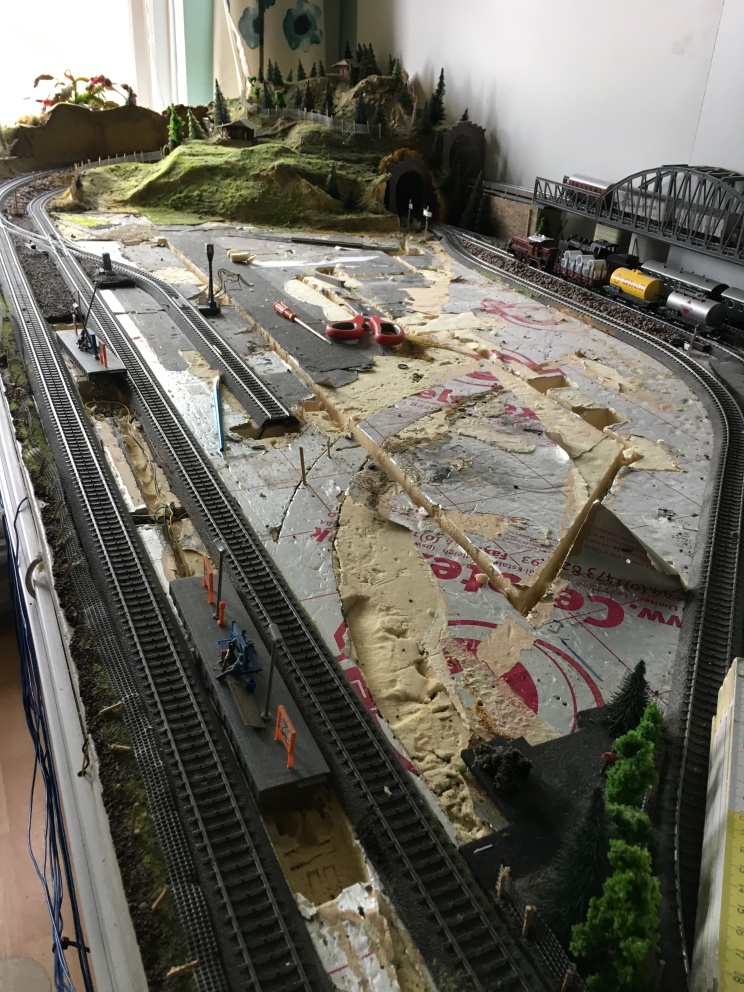 The base stripped bare

Just toying with the idea of a hillside going across the valley between the two hillsides. I enjoy this part of the building the most as I try out different landscaping options before the detailing begins.

This layout will also provide me with the opportunity of refining ie completely removing and redoing the lighting circuits I’ve been using.

East side of Neuenburg featuring hill with FKK park, town house and its vegetable garden

A sturdy little puffer, that keeps on going …

4 comments on “My rail layout”